On tour around the UK, Berlin-based folk & pop singer-songwriter joins us on June 16th for a Sunday Session in the Barn.

The set promises something for everyone, with a varied selection of songs on acoustic guitar, piano and Celtic harp.

She will be joined by Lukas Creswell-Rost, on lap steel/electric guitar. 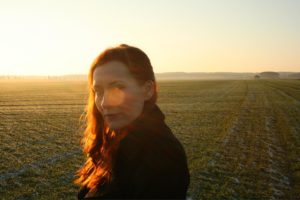 Emaline Delapaix is an Australian singer, composer and musician who lives in Berlin, Germany.

She also takes influence from Scandinavian music – “music that invokes the weather like storms and warm sunsets.”

After a difficult year of illness and depression, in 2010 Emaline decided to quit her day job in Toronto, moving to an isolated fixed caravan in rural Eastern Germany, close to the Polish border, where she taught herself to play three instruments and lived for a year and a half before settling in Berlin as a professional musician.

Since then, she has performed over 500 shows all over Europe, Australia and Canada, creating a dedicated following and becoming well known for her raw and passionate live performances. In Spring 2015, she made her film debut as a silent narrator and composer for the Arte German/French Television documentary ‘Helden der Zukunft’ (Heroes of Tomorrow), an environmental film set in the future looking back on the current crises we are facing today.

The new album ‘With Every Beat’

The new record is a sonic soundscape interlacing stories and thoughts about current world issues, dealing with social media addiction, animal rights, the lack of female role models in mainstream music, mental health, and the memory loss and death of a beloved Grandparent with Alzheimer’s disease.

This error message is only visible to WordPress admins