Our Stu and his nine-year-old-son recently completed a 100 mile tandem ride around the Lake District.

Stu Zach took on the Jenn Ride – a bikepacking route that features some of the most challenging terrain in the South Lakes. More than 200 participants took part in the event, which runs every year in memory of Jenn Hill. 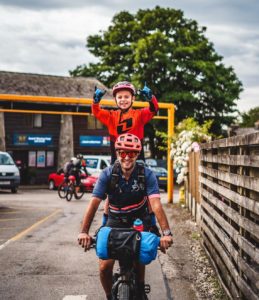 Stu said: “We started on the Saturday morning (6th July) and cycled for 15 hours that day. Zach was really enjoying it and didn’t want to stop, so we didn’t end up stopping to camp until midnight.

“The terrain was mainly off-road, single tracks, and it was pretty technical in places. There were some big climbs and big pushes uphill. One of the most challenging was Walna Scar in Coniston. It takes a good hour or so of really pushing to the top, so it’s tough. Some of the people we passed couldn’t believe riding down how technical it was and were asking us how we were doing it on a tandem.”

He added: “Zach didn’t moan once, he really enjoyed it. He’d jump off the tandem while I was riding to open the gates for us and then he’d jump back on again as I went past. With tandems, you always have passers by asking if the person on the back is pedalling, but Zach didn’t stop. There were some hills that I wouldn’t have been able to get over if he hadn’t been there.”

Stu is the co-owner of Kirkby Lonsdale Brewery and The Royal Barn. This latest challenge is part of his fundraising effort in aid of Prostate Cancer UK. Stu’s original target was to raise £1,000 – however, his total currently stands at £1,202. 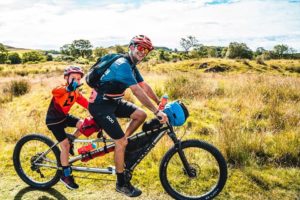 Stu added: “We raised an extra £590 for the fundraising just from this. Lots of people donated when they saw Zach was doing it with me too and people even stopped us to give donations during the route. It was a great experience for him, and afterwards we went into his primary school to do a talk about it for the pupils.”

To sponsor Stu and Zach for their tandem ride, there are collection boxes in The Royal Barn and also The Orange Tree, as well as Stu’s Just Giving page: https://www.justgiving.com/fundraising/stuart-taylor62

This was also featured in The Westmorland Gazette newspaper, which you can read here.

And in Cumbria Crack too. 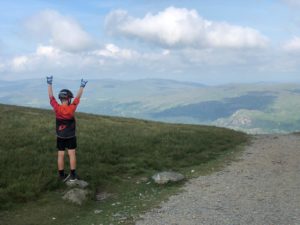