We were incredibly excited to welcome two very special guests to The Royal Barn! The Hairy Bikers, aka Dave Myers and Si King, visited us as part of their BBC series, The Hairy Bikers Go North.

We filmed the scenes back in August 2020, but it was recently shown on the BBC (if you haven’t seen it yet, you can watch it here – we’re on from around 12 minutes).

The duo visited our award-winning brewery and tap house as part of their quest to find the perfect beer, in preparation for making a “traditional northern pie” – steak, mushroom and ale, with locally sourced ingredients. 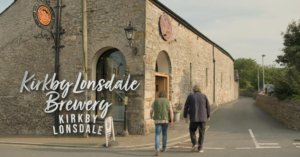 They said: “The north has always had a reputation for producing top-quality beers – some of the best beers in the world, in fact.” And speaking of their visit to The Royal Barn, they kindly said: “People will travel for miles to get a taste of their amazing beers.”

It wasn’t the first time our co-owners, Stu Taylor and James Law, had met Dave and Si. They were introduced at the food awards a couple of years earlier, so after a little catch-up chat, the duo sat down with Stu and James to try some beers. And what better way to sample them than with one of our tasting paddles? Ten half-pints of some of our most popular ales!

At first sight of the tasting paddle, Dave said: “I’ve died and gone to heaven.” Si added: “Look at that – that is a thing of wonderful, wonderfulness.” Praise indeed!

After a clink of the glasses – and a “Here’s to Kirkby Lonsdale” toast – the duo enjoyed chatting with Stu and James while tasting the different beers.

Next up on the tasting paddle was Ruskin’s – a traditional bitter and our first ever recipe. It’s 3.9% ABV and brewed using fine Maris Otter malted barley, complemented with Magnum and Brewers Gold hops to give a fruity and spicy characteristic, with a lasting dry finish. As Stu said: “People drink it because it’s a go-to bitter. We sell so much of it.” 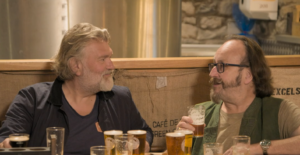 With just one sip, Si quickly decided it was the perfect beer they were looking for – one to “make the pie sing.” He also remarked on the crystal malt, in his words, “a little caramelly at the back.” Dave agreed with Si’s choice for the pie, saying: “By crikey, that’s a really, really good honest bitter.” 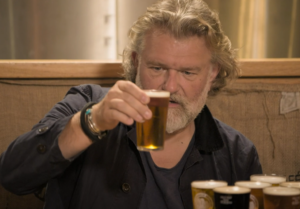 Speaking of the special visit, Stu said: “Ruskin’s has been selling out every week since the show was aired, and the Hairy Bikers used it for their pie. The Royal Barn has been really busy too, and our tasting paddles have been flying out – everyone wants to give them a go since Dave and Si’s glowing praise!

“We filmed the show in August 2020, and it was great to meet them. We had fans of theirs coming in, wanting to see them, and asking them to sign books. It was a great show, and it’s brilliant that they really appreciate local produce. They were really down to earth and great to chat to; it was a pleasure to have them at the Barn.”

The Hairy Bikers’ final words before leaving the Barn to cook their pie were: “It’s like a temple for beer” – we’ll certainly take that! 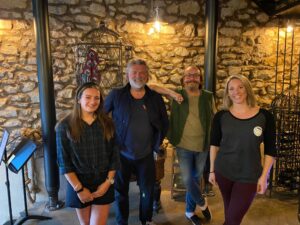 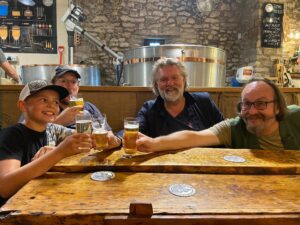 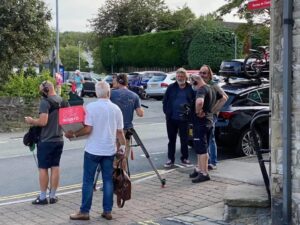